The school year did not start well. After one year away, we were returning to the school district where Karsten, my now 15-year-old son, had spent most of his academic career. Hopes were high, based on word-of-mouth that the high school program was terrific, and the teacher was fantastic. But, two weeks before the start of school, the fantastic teacher quit. We started school with a hope and a prayer that the uncertainty would work itself out.

Fast forward to October, and we were experiencing a severe lack of inclusion and every day my heart was breaking for my son. It turns out that Special Ed teachers were hard to come by in a small school district. The ones we had were temporary and demonstrated a pronounced lack of understanding, motivation, and for some, even a sense of right versus wrong. We had parent meetings, met with the principal, with the district, yet our kids continued every day to receive far less than they had a right to, than they deserved, or most importantly, were capable of.

When I would walk Karsten into his bleak classroom, he knew his routine, which was to put his backpack away and go sit at the table and play with Legos. There were no signs of homework or learning. But, there were plenty of movies and lots of Legos.

What does it feel like to know your child is not being given a chance? It takes your breath away.

I felt like I felt when I was 10 years old and Gary Taylor punched me in the stomach. Maybe it wasn’t what he intended. Maybe he didn’t mean it. But it hurt. Real bad.

The principal of our school is a good man. He wants more for my kid and the other special needs kids. He knows there are benefits to the whole school in including them as often as possible in as much as possible. But he has a district and district politics that hamper his own efforts.

So, here’s the good part of the story. I guess I would say that sports saved us. I thought Karsten would be good at wrestling, so I talked to the principal and the coach. The wrestling coach was on board without even a hint of doubt. He jumped in with both feet. And, he knew his guys and that they wouldn’t bat an eye either.

I was nervous though. This was the first team Karsten would be on that was not geared towards special needs. He was on his own. With the big guys.

After the first practice, here comes Karsten out of the wrestling room door with his shirt off and noticeably strutting his stuff. I had to chuckle. Who was this? I noticed a few of the other guys (the ones who had clearly been visiting the weight room) without their shirts on too. Karsten had his copycat eye on them. Peers!  I had a fluttering of excitement that this was the right thing.

Wrestling is hard. I never knew. The coach works them like they are at boot camp. I peeked in on a few practices and Karsten was participating, with breaks. And, at the end of every practice he would come out shirtless, but just a little bit taller, just a little more confident and proud of himself. Right before my eyes.

We went to our first meet and Coach arranged for a wrestler from another school to take on Karsten in a match in front of the crowd of hundreds of people. Now that’s a coach!

Karsten was visibly nervous. He didn’t push too hard, but the other boy just stayed with him. Eventually, Karsten kicked it in a little, and though I was focused on him, I could sense what was happening in the gym.

There were two other matches going on at the same time, but slowly, section by section, people started to pay attention to what was happening on Mat One. I could hear them start cheering my boy on. I could tell they were all rooting for him. When Karsten pinned his opponent and the referee raised his hand in victory, the whole gym erupted in cheers. And, I of course erupted in tears.

The tears were only partially for Karsten and his inclusion in this event. They were also partially for me, because I never thought I would have the experience of cheering my son on at a high school wrestling match. Something so normal. I too felt included in the world of mothers and sons.

But, my tears were also for the feeling that spread around that gym. There was love. There was happiness. There was joy in watching the success of another human being. It didn’t matter that the match wasn’t real. To Karsten, it was one hundred percent real and no one would disagree. They cheered for him just like they did for the state champion. 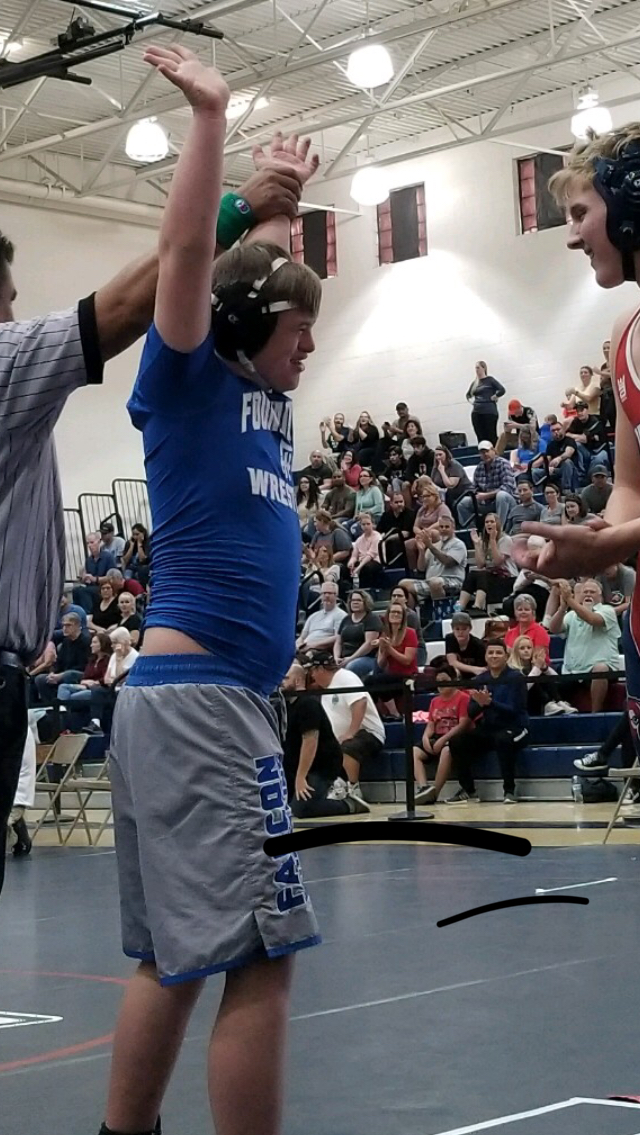 After Winter Break, we got another new teacher. This time, it was the teacher the parents had been requesting all along. She is young, vibrant, kind, and ready to expect the best from our kids, to push them to learn the skills they will need to lead a good life.

Karsten isn’t included as much as he could be, but we’re working on that. And every time my boy participates as an equal—one with different abilities—there is a tiny revolution in how others think and feel about special needs. I have witnessed inclusion and know for sure; the more the better (for all).